1/19/2018
A group of fifth grade students, inspired by their study of plastic waste in the world's oceans with Grade 4 and 5 science teacher Whitney Morris, have launched an initiative to encourage Shore community members to reduce their use of plastic. The project kicked off the week of January 15 with informational student-led presentations and an all-school 'Plastic-Free Friday.'

According to Morris, fifth graders became passionate about creating change at Shore after learning about the vast quantities of plastic and other trash, discarded by humans, that litter the world's oceans, endangering sea life and the environment. Scientists estimate that a staggering 8 million metric tons of plastic pollution enter the oceans each year from the world's 192 coastal countries. Debris such as plastic bottles and bags endangers marine mammals, birds, and other organisms, which become entangled in or ingest them. Fishing and shipping industries are also impacted by marine debris, due to damage to vessels and equipment. In addition, coastal communities spend millions cleaning up their shorelines every year.

A movement to reduce or eliminate a chief source of ocean debris, plastic bags, has been gaining momentum around the world, including in Boston, Salem, Beverly, and other local communities. On January 1, 2018, a new "Plastic Bag Reduction Ordinance" went into effect in the City of Salem. The purpose of the ordinance, according to the city, is "to reduce the number of single use plastic bags that are being used, discarded and littered, and to promote the use of reusable checkout bags by retail establishments located in Salem." Boston's ban will go into effect within the year, and a similar ordinance is under consideration in Beverly. Other local communities with bans already in effect or being considered are Manchester-by-the-Sea, Marblehead, Newburyport, Hamilton, Ipswich, and Cambridge.

During their information sessions, the fifth grade organizers of the initiative emphasized several startling facts to encourage their peers to reconsider their use of plastic. They noted that of the nearly 300 million tons of plastic produced every year, more than 50% is used just once and then thrown away. Packaging accounts for the largest percentage of that total. Annually approximately 500 billion plastic bags are used worldwide, and in the United States, 100 billion plastic beverage bottles are sold in a year, amounting to about 315 bottles per person.

Despite the grim statistics, fifth graders reminded listeners that there are simple things anyone can do to help reduce plastic pollution. Exchanging plastic drink bottles and grocery bags for reusable ones was their top suggestion; reusing, recycling, and 'upcycling' plastics into useful or decorative items is another simple action anyone can take.

On Plastic-Free Friday, students worked together to put some of these ideas into practice. Many carried reusable water bottles, and all joined in creating upcycled crafts and jewelry, such as braided fashion made of plastic grocery bags, necklaces crafted from bottle caps, and bracelets created with rings cut from plastic drink bottles. Upcycling ideas created elsewhere have turned into popular product trends, including bags and backpacks made from car tires or used traditional fabrics, high-tech materials made from industrial plastic byproducts or car tires, and furniture and more created out of discarded wood, cardboard, and other secondhand finds.

The fifth grade plastic-free initiative was set to continue throughout the month of January with curriculum suggestions for classroom activities as well as a drawing contest on the theme of reducing plastic ocean waste. The winning drawing will feature on a reusable tote bag to be designed and sold by students as a fundraiser. Money raised will go to local organizations working to address the issue of plastics in the ocean, including Salem Sound Coastwatch, which has helped to push plastic bag bans in a number of North Shore communities and regularly holds cleanups on the Sound. 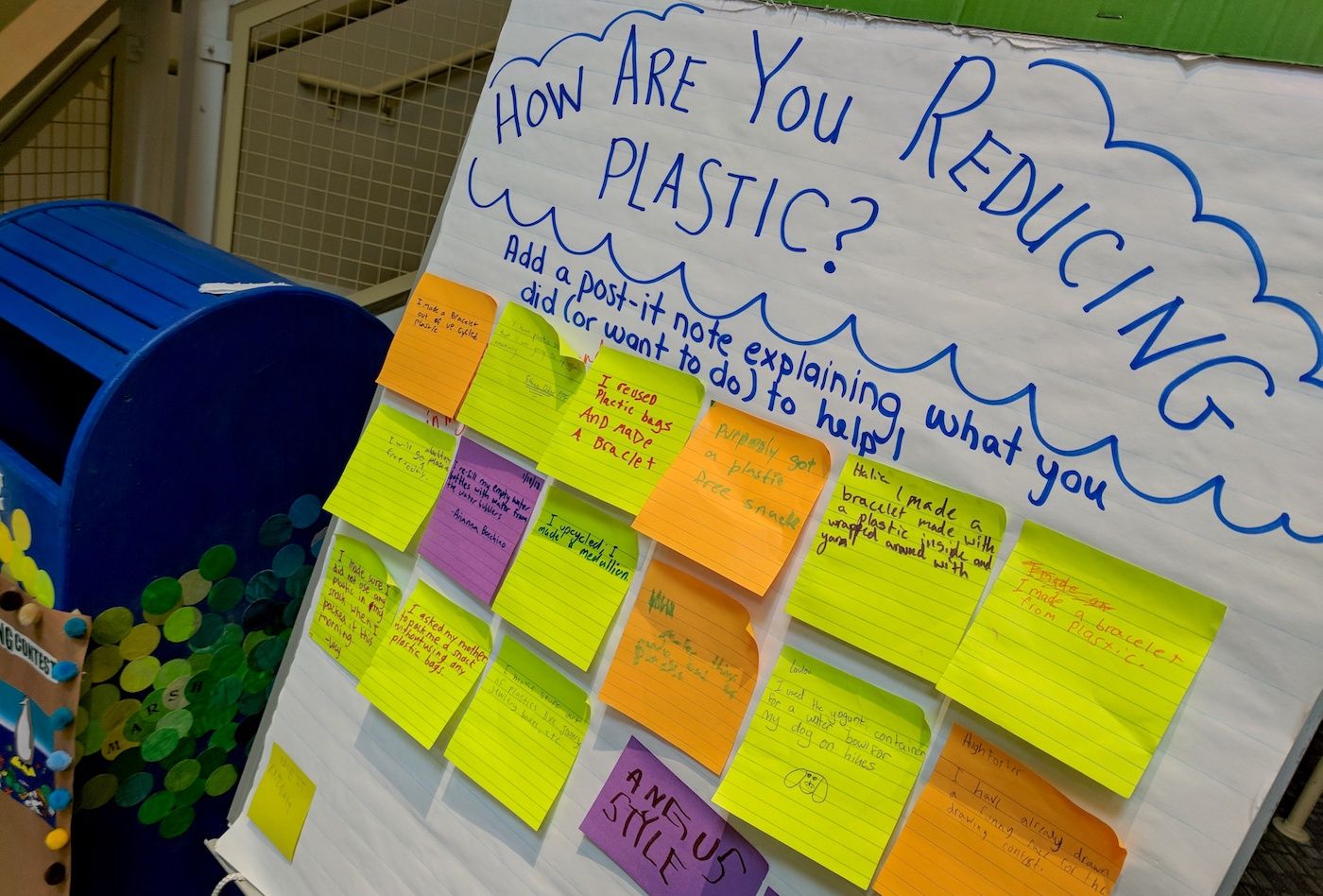